This Blog is Being Re-Constructed....

This blog is being redesigned to be more feature-oriented instead of status-oriented, though there may be occasional posts related to significant activity on the sun.

If you are looking for frequent updates on the latest solar activity, one of the best web sites I have found is www.solarham.net.

Thanks for visiting www.solarflarewatch.com, updates intentionally done the old-fashioned way...and be sure to stop by the @SolarFlareWatch Twitter page too...
Posted by Susan Larison Danz at 3:49 PM No comments:

Active Thanksgiving Week on the Sun

The sun picked Thanksgiving Week in the U.S. to become active once again, part of the reason this blog and the associated web site SolarFlareWatch.com have been a bit behind in updating.

Starting with the most recent updates first, SolarHam.com just posted a fascinating image from NASA/SDO showing a large channel across the southern hemisphere of the sun.

According to Discovery News, "NOAA space weather forecasters believe [sunspot] AR1618 could generate an X-class solar flare -- the region has a 'delta-class' magnetic field, a configuration that has enough energy to produce the most powerful of solar eruptions".  SpaceWeather.com also notes Sunspot AR1618's potential to create Earth-directed X-class solar flares on November 23, though the sunspot's potency is diminishing.  SolarHam.com indicates that the chances for a strong flare have passed due to the sunspot's deterioration.

An X-class solar flare is the most powerful on the scale and can potentially disrupt satellite communications and power grids.

SpaceWeather.com is also conveying NOAA's prediction of  "a 60% to 65% chance of polar geomagnetic storms on Nov. 23/24".  This is due to a CME on November 21 and yet another on November 20, as reported by NASA.  According to NOAA, the first storm period is expected to be mild, anticipated around mid-day on November 23.  However, NOAA says "major storm levels" could occur early on November 24, though SolarHam.com predicts no more than "Moderate" levels.


Earlier in the week, multiple news organizations covered a pair of non-Earth-directed solar flares on November 16 that would have had major impacts on Earth had they been headed towards Earth.  An interesting Fox News report on November 19 described the event as a "solar tsunami", with popular physicist Dr. Michio Kaku discussing the potential impacts of the sun entering an active period.  NBC Nightly News also reported on what NASA described as "Double Trouble" flares.

Stay tuned for more updates to this blog, as it would be wise to keep a close watch on the sun the next couple of days.


Posted by Susan Larison Danz at 12:47 AM No comments:

NASA reported a "slow moving" coronal mass ejection (CME) was released from the sun Friday, November 9, 2012 at 10:24 AM EST.  The CME is directed towards Earth, according to NASA.  The CME was photographed Friday by the ESA/NASA Solar Heliospheric Observatory (SOHO) at 10:48 AM EST.

Large earth-directed CMEs can result in geomagnetic storms which can disrupt satellite communications or electrical devices, but NASA indicates a CME of this nature and magnitude is more likely to simply result in aurora borealis displays near the poles.

The CME is moving 350 miles per second towards Earth.  NASA did not indicate when the impacts of this particular CME will affect the Earth but did note that CMEs in general "can send billions of tons of solar particles into space and can reach Earth one to three days later."

This CME follows a period of relatively quiet solar activity since the X1.8 solar flare released on October 23.

Posted by Susan Larison Danz at 2:17 PM No comments:

An impulsive, short-lived X1.8 solar flare from sunspot area AR1598 on the left side of the sun reached peak intensity at 03:17 UTC early on October 23, 2012 (11:17 PM EDT on October 22) [Update: Later reports from NASA gave 03:22 UTC as time of peak brightness].  X-class flares are considered the highest in intensity.  This particular flare had a brief duration and was on the lower end of the X-class scale.

SolarHam.com produced a video of the X1.8 solar flare based on NASA imagery.


The M9 flare on October 20 also was emitted from active region AR 1598.  This area is being carefully monitored for future flare activity.

NASA reported on October 22 multiple slow coronal mass ejections (CMEs), but due to the active region's position on the sun, these were not headed towards Earth.  Early reports from non-NASA sites such as SolarHam.com suggest that the larger X1.8 flare will likely not produce a CME directed towards Earth.  Stay tuned for future official reports from NASA on the latest flare.
Posted by Susan Larison Danz at 12:20 AM 1 comment:

Solar Flare Over Weekend on Higher End of Moderate Scale

The sun produced a solar flare over the weekend on the higher end of the moderate scale.  On Saturday, October 20, 2012, the NASA Solar Dynamics Laboratory (SDO) reported a "significant" flare which reached maximum intensity of M9 at 2:14 EDT/18:14 UT.


The Belgium Royal Observatory Solar Influences Data Analysis Center (SIDC) assessed Saturday's flare at M9.1 and also reported six lower intensity C-class flares. SIDC noted there was a CME associated with the flare, but it was not directed towards Earth.  However, according to SIDC, "M-level flares are possible within the next 48 hours, with a slight chance for an X flare and a proton storm".  SIDC noted the sunspot region associated with Saturday's flare is the newly labelled NOAA AR11598.


SolarHam.com presented an interesting video compiling imagery from NASA on the October 20 solar flare.  Commentary on this site also pointed out the cube shape that can be observed on the sun on middle right (not in the region of the flare).  I have highlighted the cube shape on a photograph originating from NASA/SDO (full photo shown at the top of this blog). 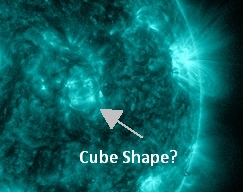 
Posted by Susan Larison Danz at 11:27 PM No comments: 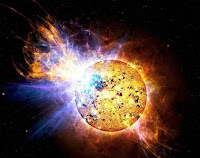 This blog is currently under construction.

The initial intent of this new resource is to provide timely links to relevant news reports from around the world, especially as we enter into a time of more active solar flare activity.
Posted by Susan Larison Danz at 12:09 PM 1 comment:

For the latest news, resources and fascinating facts on our local star, visit:

Susan Larison Danz
United States
A writer, researcher, teacher, mystic, philosopher, advisor and producer, with degrees in Computer Science and Mathematics. Host of The Frontier Beyond Fear podcast, now in its 11th year, with over 400 episodes.